Hurricane Ida’s lashing of Louisiana is supercharging a fight in Washington over spending tens of billions of dollars to protect the U.S. from future storms.

The Category 4 hurricane and its 150 mph winds are bolstering the backers of the Senate-passed infrastructure bill, who say the disaster shows the urgency of enacting the legislation’s $46 billion in proposals to fortify the defenses against coastal flooding, relocate vulnerable communities and otherwise build resilience against disaster. They say Ida demonstrates that such projects work, pointing to $14.5 billion in newly built levees, floodgates and other coastal defenses that helped blunt the hurricane’s damage.

But many House Republicans, including those in districts devastated by the hurricane, say the Senate’s bipartisan infrastructure bill is overkill — swamping the problem with extraneous spending on Democratic priorities like racial justice.

Meanwhile, progressive House Democrats are resisting efforts to pass the infrastructure bill quickly. They first want to ensure that the Senate will pass a separate $3.5 trillion bill aimed at addressing the root causes of climate change.

This is no time for such squabbling, backers of the infrastructure bill say — noting warnings from scientists that climate change is already making hurricanes, floods, wildfires and similar calamities more intense.

The bill’s supporters also call the climate resilience efforts an example of how Washington can work if it comes together.

Sen. Bill Cassidy (R-La.), one of the architects of the Senate plan, said he hopes infrastructure skeptics in his own party absorb Ida’s lessons.

“If we're going to make our country more resilient to natural disasters wherever they are, we have to start preparing now,” Cassidy said Monday on CNBC. “I’m sure hoping that Republicans look around my state, see this damage and say, ‘If there’s money for resiliency, money to harden the [power] grid, money to help sewer and water, then maybe this is something we should be for.’”

At the same time, progressives are redoubling their pleas that Democrats not abandon their aggressive climate agenda in the name of speeding approval of the infrastructure bill. Doing so, they argue, would leave the source of the problem unsolved — the rapid rise of greenhouse gases that are warming the planet.

Addressing future hurricane disasters “is going to require acknowledging that climate is a factor,” said Green, who said he thought a compromise was possible to pass both bills. “If we fail to acknowledge this then we will allow ourselves to slip into a time where it will become difficult to save what is currently salvageable. We will pass a point of no return.”

Climate change is intensifying hurricanes because warmer waters give cyclones more fuel to rapidly gain speed whenever they form, the United Nations’ Intergovernmental Panel on Climate Change affirmed in a sweeping scientific report last month. Scientists will explore that issue with Ida, which burst from a Category 2 hurricane on Saturday night into a major Category 4 cyclone Sunday morning, noted Gabriel Vecchi, a geosciences professor and deputy director of the Cooperative Institute for Modeling the Earth System at Princeton University.

Louisiana is still in emergency response mode but will soon get “boots on the ground” to survey what worked and what didn’t, what needs fixing and what doesn’t, Chuck Perrodin, spokesperson with Louisiana’s Coastal Protection and Restoration Authority, said in an email. He said “there is reason to be hopeful” that the marshes, barrier islands, levee walls, pump stations and flood gates performed well, given that they were “quite resilient” against last year’s tropical storms and hurricanes.

He added the $14.5 billion worth of new hurricane defenses around greater New Orleans “passed with flying colors.”

Ida amounts to a “real-time test of resilience,” said Daniel Kaniewski, a former deputy administrator for resilience at the Federal Emergency Management Agency. One would expect a $14.5 billion investment to pay off against the fiercest storm to ever hit New Orleans, he said. Ida should therefore demonstrate the need for more such projects.

“What really concerns me are the other homes and businesses outside that flood protection system that likely did not fare as well,” said Kaniewski, now a managing director at the insurance firm Marsh McLennan. “The administration and Congress are on the right trajectory, but this adds fuel to the resilience fire.”

The House is set to vote on the bipartisan infrastructure bill by Sept. 27 under a deal between Speaker Nancy Pelosi and nine Democratic moderates who had grown concerned about the size and scope of their party’s $3.5 trillion reconciliation package. That larger plan, which can pass the Senate only if all 50 Democrats in the upper chamber support it, would include ambitious measures to reduce greenhouse gases from fossil fuels.

Moderate and progressive Democrats have jousted for months about which bill Congress should pass first, with some lawmakers in each camp warning that both pieces of legislation could die if the party doesn’t unite around its agenda.

Backers of the infrastructure package say Ida shows why it’s essential for Congress to pass their bill.

“Members need to take the politics out,” Rep. Henry Cuellar (D-Texas), one of the nine House centrists who negotiated with Pelosi, told POLITICO. “People just need to understand that if they're worried about the ecological damages, storms, hurricanes — there is a lot of money that will be beneficial.”

All told, Ida’s destruction could result in insured losses as high as $25 billion, the credit rating agency Fitch estimated. That’s far less than the $65 billion that Katrina caused, but it “is likely to surpass” the $15 billion from the winter storm that froze Texas’ electrical grid and killed dozens of people this year and the $10 billion that Hurricane Laura inflicted in 2020.

But environmental activists and progressive Democrats have criticized the infrastructure bill for not doing enough to reduce greenhouse gases, even if it would fund some meaningful projects to protect against climate change. They see the $3.5 trillion bill as their best chance to capitalize on their perhaps transient control of Congress.

That kind of Democratic infighting has left vulnerable communities fearful that they won’t receive the federal money they need to face floods, hurricanes and other climate-change-fueled calamities, said Colin Wellenkamp, executive director of the Mississippi River Cities and Towns Initiative, a coalition of mayors in the Mississippi River Delta.

Wellenkamp said that while the infrastructure plan isn’t perfect, it includes valuable increases for programs. His group successfully fought to include a revolving resilience loan program and double a FEMA initiative that gives local governments money to take steps to lessen disasters before they occur. That effort, called Building Resilience Infrastructure and Communities, would get $1 billion.

“The bipartisan Senate package is not a climate bill. If you’re looking for robust overt climate measures in that bill, you’re not going to find it,” Wellenkamp said. “That would be nice to have, but we don’t want to torpedo all the work that went into the Senate package and go after this other thing and have nothing in the end.”

Progressives aren’t the only obstacle to swift passage of the infrastructure bill, however. Even some Republicans from hurricane-struck regions blanch at the amount of money Congress is proposing to shovel out the door.

Those include Rep. Garret Graves (R-La.), who surveyed the coastal area Tuesday by helicopter and saw first-hand how restored shorelines and newly built levees and floodwalls lessened the trauma from Ida. While those resilience projects worked as intended, he said he has reservations about how the Biden administration pledges to spend the bill’s resilience money — especially its plans to weigh factors such as racial equity and environmental justice instead of a strict cost-benefit analysis.

"I don't have any desire to come in and collect triple the amount of money we're going to give them if they're going to invent bullshit criteria on how they're gonna hand money out," Graves told POLITICO during an interview, driving through darkened Baton Rouge streets with intermittent cell service.

What the bill would do

Among other provisions, the bipartisan package would offer $3.5 billion over five years for FEMA’s Flood Mitigation Assistance program, which largely supports elevating or buying out repeatedly flooded homes to relocate people. That’s a sizable increase from $200 million funding the program received for fiscal 2020.

While emotionally and politically sensitive, the concept of “managed retreat” — relocating people away from vulnerable areas — “has to be part of the discussion” for Louisiana and beyond, said Laura Lightbody, director of the flood-prepared communities initiative at the Pew Charitable Trusts.

“We have simply put more and more things in harm’s way,” she said. “One of the things that we know about this area in the state is that it is rich and lush with properties that have flooded over and over again.” 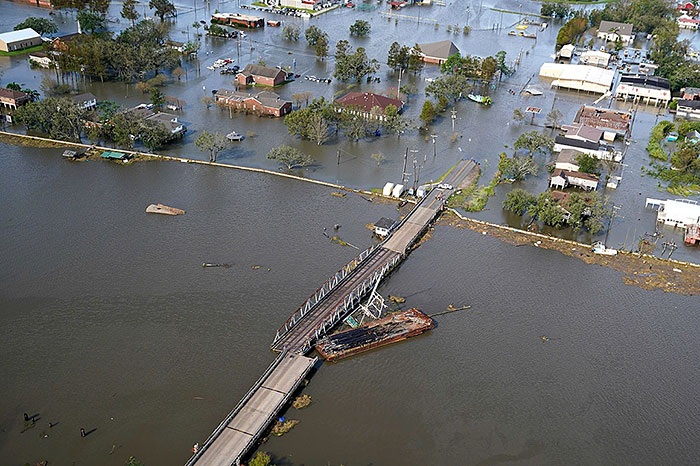 In some cases, Ida’s arrival was simply bad timing: Construction on a levee near LaPlace, La., which Ida inundated, broke ground earlier this year but is not yet finished, noted Natalie Snider, associate vice president for climate resilient coasts and watersheds with the Environmental Defense Fund. But those types of projects would get a boost with the Senate bill, she said.

In addition, the bill would fund projects like ecosystem restoration to reverse decades of dredging — largely from oil and gas operations in the Gulf of Mexico — and other human activity that have destroyed marshes and reduced sediment flows through the Mississippi River. While it is unclear how they performed during Ida, restored buffers like the Caminada Headlands near Port Fourchon helped blunt damage from Hurricanes Laura and Delta last year, said David Muth, Gulf restoration director with the National Wildlife Federation.

“What Congress does going forward is going to be critically, critically important to this. We have a long way to go,” Muth said. “And obviously climate change is accelerating the problem.”

Biden commits to communication with France after submarine spat

Biden commits to communication with France after submarine spat

Vaccine Mandate: by hook or by crook