U.S. corporate giants are scrambling to beat back anti-China sentiment in Congress and the Biden administration, aiming to avert crackdowns that would hurt their ability to do business in the world’s second-largest economy.

Since the spring, lobbying groups including the Chamber of Commerce, the U.S.-China Business Council and the National Retail Federation have been campaigning against congressional and White House moves to toughen trade and finance rules in response to China’s human rights abuses.

The groups say companies abhor the intimidation, forced labor conditions and general atmosphere of repression in China, particularly in Hong Kong and the northwestern region of Xinjiang. But they are also concerned that a trade crackdown could strangle investments U.S. firms have made in the world’s most populous nation.

“There's a huge consumer market in China. Most of the big U.S. companies are selling there. They're not just using it as an export platform. They're integrated into the economy in other ways,” said Rufus Yerxa, a former senior U.S. trade representative and WTO official who is now president of the National Foreign Trade Council.

The lobbying is aimed at derailing some of the most aggressive trade restrictions advocated by the Biden administration and congressional leaders just as the White House tries to pivot its security focus to Beijing after the withdrawal of American troops from Afghanistan.

Groups representing hundreds of the biggest U.S. companies, from Amazon to JPMorgan Chase and Nike, have so far gotten lawmakers to kill legislation that would mandate government reviews for American investments in China, weaken anti-Beijing rhetoric in an evolving House legislative package, and insert corporate-friendly provisions to an anti-forced labor bill that would reshape how the federal government implements trade restrictions. 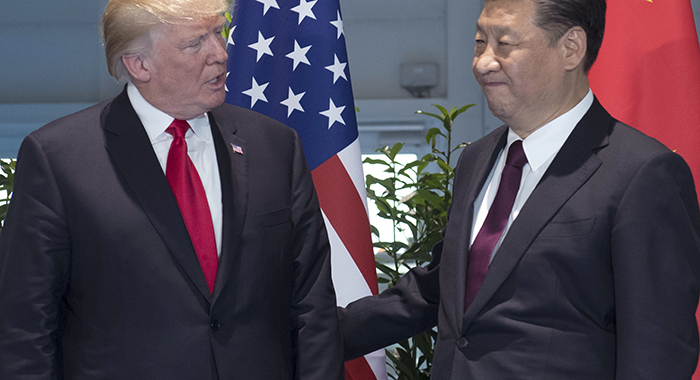 But none of those bills have been finalized, and big business groups are worried that they won’t be able to rely on their traditional allies once the fall legislative session begins.

“It feels like the business community doesn’t have any true blue friends on the Hill at this point when it comes to China,” said one industry lobbyist who asked not to be named due to ongoing work with Congress. “Everything is a matter of degree.”

Republicans have either cheered Biden’s tough line on China or pushed him to go further. That’s got some lobbyists turning to the only folks left in the room: progressives.

In recent months, the U.S.-China Business Council, which represents more than 250 American firms that do business in China, has reached out to aides for Sen. Bernie Sanders (I-Vt.) and anti-war groups like Justice is Global, one of scores of groups that endorsed letters urging Congress to pump the brakes on anti-China provisions and prioritize climate change cooperation with Beijing.

The U.S. can hold Beijing accountable for human rights and trade abuses, the groups and progressives argue, without closing down commerce or cooperation.

“We’ve tried to message that national security obviously has to be tended to and prioritized,” said Anna Ashton, the council’s vice president for advisory services and government affairs. “That may change some of the parameters of commercial engagement with China, but at the end of the day our economy has benefited enormously by being able to [trade] with China.”

Efforts from the corporate lobbyists seek to blunt the rising economic aggression toward Beijing emanating from Congress and the Biden administration that’s seen the president retain most of his predecessor’s aggressive trade policies, much to industry’s chagrin.

The White House in recent months has issued new trade restrictions and sanctions on Chinese firms while refusing to lift tariffs imposed by former President Donald Trump, insisting they are still under review.

Meanwhile, the House and Senate have advanced separate measures that would spend hundreds of billions of dollars to confront China economically and, in the Senate’s case, increase military surveillance and assistance to regional allies.

Corporate lobby groups are expressing concern that the government’s actions will cause members to draw down their business interests in China. That would not only harm their bottom lines, they argue, but diminish what little leverage the U.S. has to get China to change course from its human rights abuses.

“I would argue that a lot of [U.S. firms] are probably better forces for good business practices and good governance than maybe the state-owned Chinese companies are,” Yerxa said. “If we do some specific kind of targeted thing that makes it impossible for [U.S. corporations] to maintain their businesses, their foreign and Chinese competitors can continue doing it. How effective has it been in changing China's policies?”

The corporations have tried to align their lobbying efforts with the way progressive advocacy groups have pushed back against the emerging China doctrine. They express fear that the tougher U.S. line will commit America to decades of increased military spending and heightened tensions, potentially escalating to a regional war or worse.

“We need to distinguish between justified criticisms of the Chinese government’s human rights record and a Cold War mentality that uses China as a scapegoat for our own domestic problems,” Rep. Ilhan Omar (D-Minn.) told POLITICO this spring.

Sanders also outlined those fears in a recent Foreign Affairs article, which lobbyists said made the rounds in high-ranking corporate circles.

The attempt to make common cause with progressives comes after corporate interests were caught flat-footed during Senate debates over its sprawling bill to confront Beijing, the U.S. Innovation and Competition Act.

During the floor debates, corporate lobbyists jammed up the process by objecting to amendments that would have put new reviews and regulations in place for companies doing business with China. That created a chaotic floor debate with amendments flying back and forth between the parties for days before an eventual trade policy deal saw the bill pass easily.

In one case, the Chamber of Commerce sent out a last-minute key vote alert to members, urging them to sink an amendment from Sens. Bob Casey (D-Pa.) and John Cornyn (R-Texas) that would have set up a federal review board for American companies’ outgoing investments in China — similar to how the Committee on Foreign Investments in the U.S. reviews incoming deals from offshore firms.

The 11th-hour push was enough to defeat the amendment. But after a U.S.-China Business Council lobbyist spoke out publicly against the provision, Casey slammed her and the organization in a floor speech, saying “we know who you are” and vowing to bring the issue up again.

The event exemplified why many executives are publicly silent on the rising anti-China sentiment, though they will privately confess they are increasingly dismayed over barriers to commerce being erected by both governments.

After the incident, the U.S.-China Business Council tried to make nice with Casey, inviting him to keynote a meeting of corporate members. Casey did address its members this summer and said in early August that his staff is in conversations with the corporations on how to revise his legislation for potential reintroduction.

The pushback has seen other success in the House. Since the Senate passed its bill, leaders of House committees have toned down the anti-Beijing rhetoric in their bills and eschewed the most onerous business regulations.

The shift has pleased corporate lobbyists and progressive activists, while angering House Republicans. They voted against the anchor of the House anti-China package, the EAGLE Act, H.R. 3524 (117), when it was advanced out of the Foreign Affairs Committee in July.

“I think there has been a real effort by Democrats to incorporate progressives’ concerns on this front, and that’s why they are facing the hurdles they are with Republicans in the House,” said a lobbyist who asked to remain anonymous because of ongoing work on the bill.

Corporations also scored a preliminary victory when they won changes to the Uyghur Forced Labor Prevention Act, S. 65 (117), in the Senate. That bill would still ban imports from the Xinjiang region unless companies can prove they aren’t made with forced labor. But Sen. Marco Rubio (R-Fla.), a Senate sponsor, agreed to a longer implementation period and changes to how Customs and Border Protection issues import rules.

That version, which passed unanimously, must now be reconciled with a version the House passed 406-3 last year that is now attached to the EAGLE Act. Corporate groups say that if the Senate changes don’t make it into the House bill, they will oppose the whole package. But progressive authors of the House bill are still considering whether to accept the changes or charge forward with their own version.

The Uyghur bill is just one of many wedges that could drive progressives and corporations away from their nascent alliance. Generally speaking, the progressive lawmakers and activists are skeptical of the olive branch from corporations they often view as irresponsible actors in economic and environmental regulations.

“There is a scenario where we might find common cause on the trade war,” said Tobita Chow, director at the activist group Justice Is Global. “But if we did work with them, it’d have to be behind the scenes.”

Meanwhile, many apparel and fashion companies are more concerned about pressing the Biden administration to remove Trump’s tariffs on more than $350 billion worth of Chinese imports — including many of the raw materials they use to make products.

The Biden administration has so far refused to lift those tariffs or reopen the exemption process many companies took advantage of during the Trump administration.

“We certainly would have hoped that this administration would have quickly taken action to do something to address the tariffs, whether it was reinstating the exclusions or looking for a new policy on China to address the issues,” said Jon Gold, vice president for supply chain and customs policy at the National Retail Federation. “That was the hope coming in based on what we’d heard from President Biden during the campaign."

Lobbyists and activists will have to work fast to shape the debate before the fall legislative season. House Speaker Nancy Pelosi told industry representatives on a call earlier this month that she would not take up the Senate’s anti-China bill, and instead would craft her own broad package for a floor vote. Whatever passes the lower chamber will need to be reconciled with the Senate version in a conference committee.

In many ways, corporations are fighting against the political tide. Republicans have seized on China issues as a way to try to paint Biden as weak on foreign policy, and the Democrats’ emerging response is to point out that he hasn’t changed much from Trump.

In a memo reported by the Huffington Post this month, the Democratic Senatorial Campaign Committee urged campaigners to focus on Biden’s trade and China policies when engaging Trump voters, saying he will “bring jobs back from overseas, and will help us compete with countries like China that threaten our economy.”

Comments like that rankle corporations that were more than happy to give Biden a chance to review Trump’s trade policies, but have now grown impatient for action.

“[Biden] can be tough on China and not stick to policies that we’ve had for the past five years that haven’t worked,” Gold said.

Steven Overly contributed to this article.

Taliban shootout in palace sidelines leader who dealt with US